The existence of Extremely Low Frequency (ELF) waves in several places on earth, also influences the socio-cultural mindset of certain people who strongly believe in paranormal, superstitious and mystical stories about the existence of ghosts around them. One of the places known for its paranormal practice is the people who inhabit Alor Island in Alor Regency, East Nusa Tenggara, Indonesia. This paranormal phenomenon still cannot be explained logically, so that sometimes it causes complicated social problems in society, even the stikma of "Orang Alor Suanggi" appears in social interactions.

This research was conducted to find out the existence of Earth's Extremely Low Frequency (ELF) electromagnetic field radiation at a certain location with a case study in Alor Regency. This research was conducted by measuring the level of Extremely Low Frequency (ELF) wave radiation using an EMF detector at haunted / sacred places in Alor Regency and connecting it with paranormal events in the community.

This work is licensed under a Creative Commons Attribution-NonCommercial-ShareAlike 4.0 International License.

The copyright to this article is transferred to Jurnal Ilmiah Flash if and when the article is accepted for publication. The undersigned hereby transfers any and all rights in and to the paper including without limitation all copyrights to this journal. The undersigned hereby represents and warrants that the paper is original and that he/she is the author of the paper, except for material that is clearly identified as to its original source, with permission notices from the copyright owners where required. The undersigned represents that he/she has the power and authority to make and execute this assignment.
We declare that:
1. This paper has not been published in the same form elsewhere.
2. It will not be submitted anywhere else for publication prior to acceptance/rejection by this Journal.
A copyright permission is obtained for materials published elsewhere and which require this permission for reproduction.
Furthermore, I/We hereby transfer the unlimited rights of publication of the above mentioned paper in whole to Jurnal Ilmiah Flash. The copyright transfer
covers the exclusive right to reproduce and distribute the article, including reprints, translations, photographic reproductions, microform, electronic
form (offline, online) or any other reproductions of similar nature 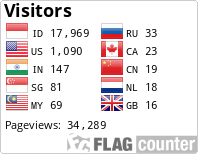 This work is licensed under a Creative Commons Attribution-ShareAlike 4.0